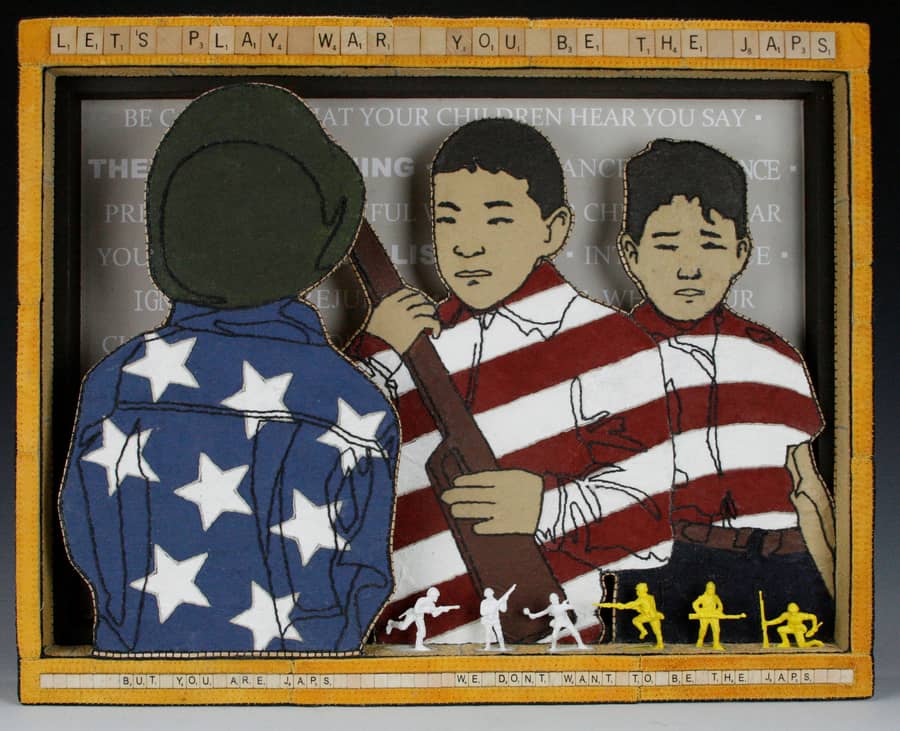 Bainbridge Island, WA - Bainbridge Island Museum of Art (BIMA) will open the first of its spring exhibitions on Friday, March 4, 2022 with Boundless, a group show of Artist’s Books curated by Catherine Alice Michaelis and Cynthia Sears. Included in Boundless is Troubling: Artist’s Books that enlighten and disrupt old ways of being and seeing curated by Tia Blassingame and Ellen Sheffield. Opening Friday, March 11 is Americans Incarcerated: A Family’s Story of Social Injustice, n collaboration between Jan and Chris Hopkins (Everett, WA) to memorialize the eviction of Japanese Americans during World War II. Executive Order 9066, issued by President Franklin Roosevelt on February 19, 1942, authorized the evacuation of all persons deemed a threat to national security from the West Coast. BIMA’s spring exhibitions are made possible with support from Laird Norton Wealth Management, Stoel Rives, The Ames Foundation, and Leslie & Michael Lebeau. The exhibitions are open daily from 10am-5pm and admission is free. The Museum is just steps away from the Bainbridge Island ferry terminal at 550 Winslow Way East, Bainbridge Island, WA 98110. Complete exhibition listings can be found at www.biartmuseum.org/exhibitions/.

Boundless
March 4th through June 22nd
Explore the wonderful and intimate world of artist’s books with this large exhibition co-curated by Cynthia Sears and Catherine Alice Michaelis. Boundless features over 100 one-of-a-kind and editioned works — the vast majority selected from the Cynthia Sears Artist’s Books Collection — plus related broadsides, zines, and paintings. This exhibition showcases a diversity of format and content addressed within this art form.

Boundless includes a supporting exhibition titled Troubling: Artists’ Books that enlighten and disrupt old ways of being and seeing, co-curated by Tia Blassingame and Ellen Sheffield, and a Beacon Window Gallery installation from the Book/Print Artist/Scholar of Color Collective.

BIMA has published an exhibition catalog with essays from Mark Dimunation of the Library of Congress, Sears and Michaelis, and Blassingame and Sheffield. The catalog is $24 and available in person or online at the BIMA Store.

Americans Incarcerated: A Family’s Story of Social Injustice
March 11th through June 12th
Americans Incarcerated: A Family’s Story of Social Injustice is an evolving collaboration between Jan and Chris Hopkins (Everett, WA) to memorialize the eviction of Japanese Americans during World War II. Executive Order 9066, issued by President Franklin Roosevelt on February 19, 1942, authorized the evacuation of all persons deemed a threat to national security from the West Coast. Over 100,000 adults and children of Japanese ancestry were sent to assembly centers, then housed in guarded facilities known as internment camps.

Their exhibition is inspired by Jan’s desire to learn more about her cultural identity. As a child of interned Japanese Americans, she grew up with little knowledge of her heritage or what her family endured. The journey begins with the story of Jan’s parents, who met at Camp Harmony, a temporary processing facility at the Puyallup Fairgrounds.

Their work is engaging, beautiful, and heartbreaking all at once. It portrays the range of fear, racism, alienation, and loss experienced through this fateful chapter in American history. It also honors the resilience and patriotism many chose to embrace. The exhibition offers space to learn more about the Japanese American exclusion during World War II, and discuss the wide range of opinions, repercussions, and semantics associated with it today.

This exhibition coincides with the 80th Anniversary of the Japanese American Exclusion from Bainbridge Island on March 30, 2022, the first such removal of West Coast residents. In 2018, Jan and Chris Hopkins displayed Americans Interned: A Family’s Story of Social Injustice at the Schack Art Center in Everett, where they received an Artists of the Year award and have continued to expand this project.

Bainbridge Island Museum of Art inspires curiosity, wonder, and understanding by connecting people with the contemporary art and craft of the Puget Sound region. The art museum exhibits, interprets, preserves, collects, and promotes works of proven cultural value as well as new works by emerging artists and craftspeople. The art museum is open daily 10am-5pm. Free admission. All COVID-19 precautions can be found here.

BIMA is located in beautiful downtown Bainbridge Island, at the corner of Hwy 305 and Winslow Way; just steps away from the ferry terminal, and with easy access via public transportation or by car from the Kitsap Peninsula. Visit their site and follow them on Facebook and Instagram!