BPA's "The Comedy of Errors" ~ Preview by Michael C. Moore 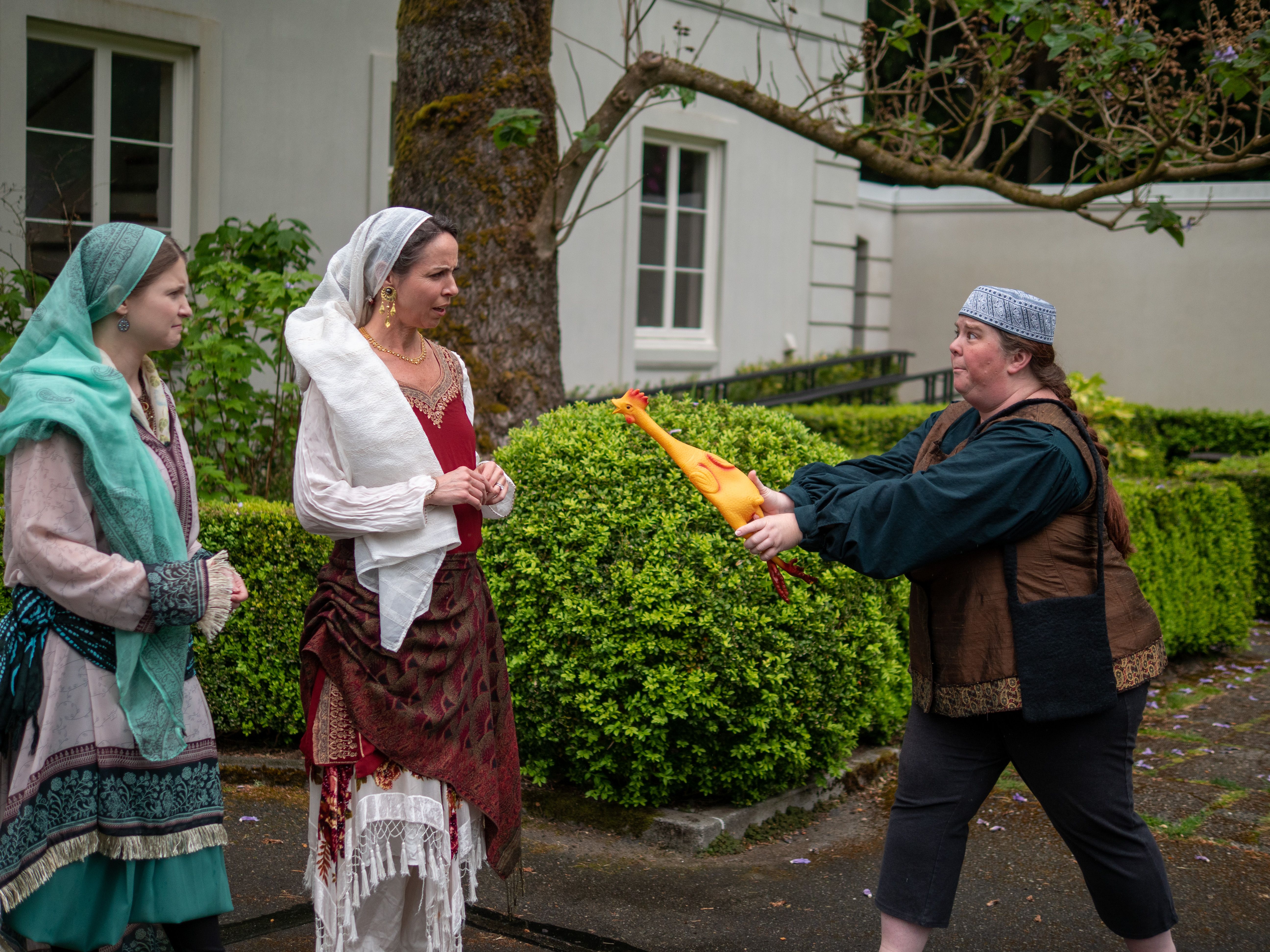 BAINBRIDGE ISLAND – Presented with a venue as stately, dignified and elegant as the residence at Bloedel Reserve, director Kristi Ann Jacobson knew immediately what she must do.

She had to go silly.

“Of course I did,” said Jacobson, who’s directing Bainbridge Performing Arts’ “Bard at Bloedel” production of William Shakespeare’s “The Comedy of Errors.” “I’m always up for comedy, making things as funny as possible. And it’s a silly play. As soon as I knew it was the play we were doing, I went right to my Rolodex of silly, funny, slapstick little things, cartoon moments we might be able to use.”

As if to illustrate, cast member Kristin Guy is outside the front door of the residence as Jacobson speaks, having an animated conversation with … a rubber chicken.

Look it up in the Rolodex, under “C.” For “Chicken, Rubber.”

“The Comedy of Errors” runs for a trio of Thursday-Sunday weekends at the residence, beginning June 16. It marks BPA’s return to Bloedel following two years of COVID cancellations. It’ll be the first production at the residence, following six years of shows at the sheep barns in the meadow across the lushly forested and gardened grounds. (BPA’s first al fresco Shakespeare outing was in 2013, with performances of “The Tempest” at IslandWood.)

Jacobson, one of Kitsap’s go-to Shakespeare directors and performers, directed the most recent “Bard at Bloedel” production, “As You Like It” in those happy, pre-COVID days of 2019.

She said she welcomes the return to Bloedel, and the fresh start the move to the residence represents.

“It’s been a wild year and a half,” she said of the COVID kibosh that put the skids on not only the 2020 and 2021 “Bard at Bloedel” productions, but most of the rest of the normally vibrant Kitsap theater scene. “It’s wonderful to see people finally able to come back and see live theater, and able to come back to their craft.

“Working here isn’t really much of a change (from the goat-barn location),” she added. “We’ll still use the building the same way, with people entering and exiting from this side and that side and wherever. It is a more beautiful backdrop, for sure.”

Entrances and exits are integral in putting the comedy into “The Comedy of Errors,” in which two sets of identical twins, separated in infancy, wander around Ephesus, leaving confusion – and laughs – in their wake. One set of twins, Ephesus homie Antipholus and his counterpart from Syracuse, are nobles. Fate has made the other set, Dromio and Dromio, their respective lackeys.

The situation is ripe for mistaken identities, misunderstandings and near misses. “The Comedy of Errors” is one of Shakespeare’s earlier comedies, and it sets the template for the folderol of his later, better-known – but not necessarily funnier – romps.

“I’ve been obsessed with this play ever since high school,” said Amanda Gutgsell, who had the lead role of Rosiland in 2019’s “As You Like It” (as Amanda Pease) and plays Antipholus of Ephesus in BPA’s return to Bloedel. “I remember the first time I read it, I thought it was so funny.

“They could’ve offered me, like, ‘Servant,’ or any part, really, and I’d have been here,” added Gutgsell, who’s done a number of Shakespeare productions around Kitsap in recent years. “I’d have done anything to be a part of it.”

Seconding that emotion is Amy Jo LaRubbio, a Puget Sound theater veteran who relocated to Bainbridge just in time for the COVID shutdown to postpone her return to the stage following a long hiatus. She was in the company for BPA’s first post-quarantine production, last year’s musical revue “All Together Now,” and joins “The Comedy of Errors” cast as Adriana, the wife of Antipholus of Ephesus.

“I wanted to audition for ‘Silent Sky’ (BPA’s spring production), but we were traveling. I was so glad to be able to take part in this.”

LaRubbio is a “Comedy of Errors” veteran, it turns out. She was in a musical version mounted by Civic Light Opera some years back, playing Luciana, Adriana’s sister – a role covered for BPA by Emily Lacroix.

Jacobson’s cast also includes real-life twins Kelli McAuley and the aforementioned Kristin Guy, playing – naturally – the Shakespearean twin Dromios; Kitsap fixture Gary Fetterplace; and Katie Sweeney, who makes it 3-for-3 in post-COVID BPA productions, adding Antipholus of Syracuse to her resume after contributing to both “All Together Now” and “Silent Sky.”

Even with the COVID-imposed break, it’s been a while since “The Comedy of Errors” made landfall on Kitsap County shores. Sharon Greany, costumer for the BPA production, directed a version for Poulsbo’s Jewel Box Theatre back in 2017.

As with so many other things, it’s good to have it back.

What: The Comedy of Errors by William Shakespeare.

View this article in PDF format! 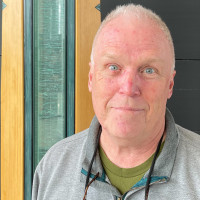