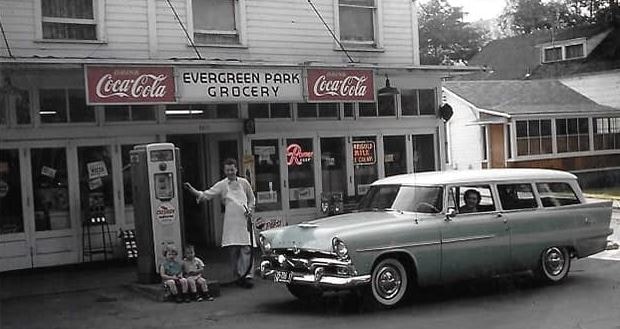 CJ’s, as the neighborhood general store is affectionately called, opened in 2007 in a building that was erected in the 19teens or the end of the 1920s (need a deep historical dig on that one) in a neighborhood that back then was known as Evergreen. Seemingly, the building had a major rebuild circa 1940. From previously housing a general store in the early days, to an organic market prior to CJ’s occupancy, it’s a place where people have brought their dreams and visions into reality.

By keeping a finger on the neighborhood pulse, and with the support of a reliable, hard-working and cheerful team, over her thirteen years in business CJ’s has woven in creative changes to keep up with what people need. Let’s face it; there is no way an approximately 1,500 sq. ft. old-fashion independent general store competes with 24 hour a day franchises, or anything bigger. What CJ’s consistently does is finds niches to fill. The store carries groceries and other merchandise, stocking shelves wide enough and deep enough to provide for its customers. From cooking staples to candy and paperclips, it’s amazing what’s available.

In order to succeed, a small general store discovers unique roles and creatively fills them. During Farmer’s Market season when the market is open Thursday afternoons, Chef Richard cooks up delicious menu specials. And every day he creates exceptional soups, and favorite standbys like mac ‘n cheese for the freezer section. In addition to fresh deli sandwiches and salads, baked-on-premises pies, cakes, and other goodies can be relied upon. And what would a general store be without a barista service or our favorite ice cream flavors!

CJ’s Evergreen General Store and Catering Company is a hub for ordering and picking up specialty items such as raw milk from Dungeness Valley Creamery, and cage-free eggs from Stiebr’s Farms. It is a designated drop off and pickup spot for Kitsap Fresh, an online farmer’s market. Important to the community at large, the store supports Stand Up for Kids, a national organization that provides help to homeless kids. There folks can drop off hygiene products and individually packaged food items that make up kits that get distributed to those in need.

Regrettably, due to the corona virus situation, the Catering Company part of the business, a significant portion of CJ’s Evergreen General Store and Catering Company income, is on hold. Current hours of operation are 10am to 7pm, mon-sat, and 10am to 6pm sun. (360) 479-2708. Since groceries are sold, the public may enter under the control of staff with regard to social distancing. Call to arrange for curbside pickup of groceries and/or meals with payment made on the spot.

Current support of CJ’s Evergreen General Store and Catering Company during these challenging times is important to the future. When those sunny days once again find our local Farmer’s Market bustling in Evergreen Park on Thursday afternoons, when local musicians make music there that sings along the breezes, and the voices of children at play return, friends and neighbors will be able to cross the road to CJ’s to partake of the menu special, indulge in a barista drink, and enjoy a cup or cone of their favorite ice cream!

Connect with CJ's by clicking their business card up top!

*The 1950s image at the top of the Evergreen Park Grocery (current location of CJ's Evergreen General Store and Catering Company) is c/o Facebook page You KNOW you're from Kitsap County when..... Go there, join, and find out more about Bremerton's fantastic history and wonderful memories!