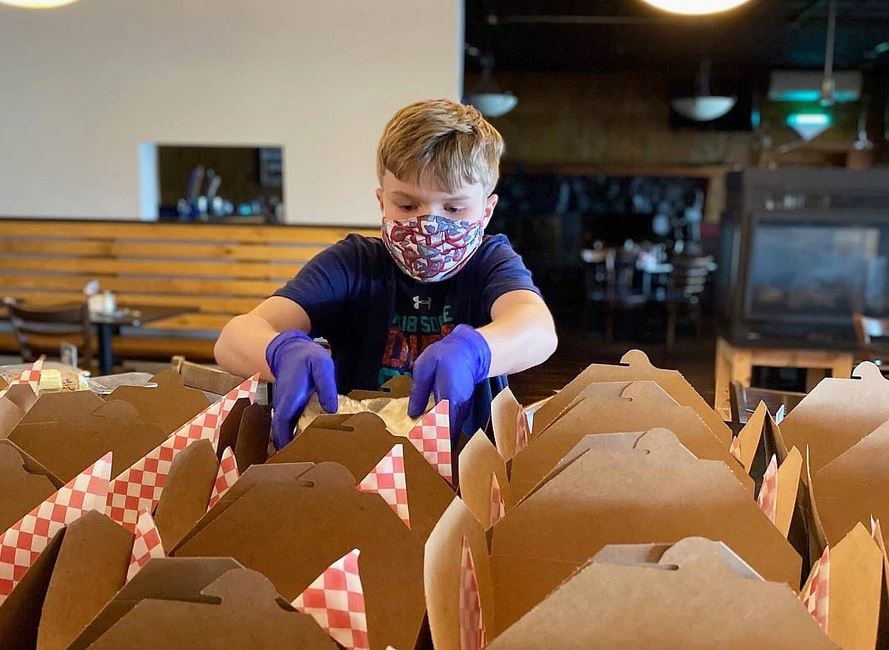 On March 16, 2020, Governor Jay Inslee signed a statewide emergency proclamation to temporarily shut down restaurants, bars and entertainment and recreational facilities, however, it allowed restaurants to provide takeout services. Following this, Kitsap Culture interviewed the owners of the Kingston Ale House, and CJ's Evergreen General Store & Catering to see how their businesses were faring. Initially, both businesses, as well as many food establishments, experienced an uptick in the volume of take out and curbside business as folks began ordering take-out items like never before.

In addition to the great support shown by individuals to individual businesses, some non-profit agencies emerged with creative ideas that contributed, tremendously, towards helping keep some for-profit food establishments afloat. One such agency is The Arc of the Peninsulas, referred to as 'The Arc'. Their stated mission focuses on maintaining services critical to individuals with developmental and intellectual disabilities, promoting opportunities for them that include living, learning, playing, and working in the communities.

In a nutshell, traditional relationships between non-profits and for-profit entities are that for-profits donate to non-profit organizations for philanthropic and business reasons. Non-profits rely heavily upon donations and grants to maintain their mission and operations. What Kitsap Culture has found is that The Arc was able to turn the table on this traditional relationship by using generous donations toward supporting restaurants and catering businesses!

In April, 2020, The Arc started a program called "Full Circle Meals" which initially provided meals to the under-served and those on the front lines of the COVID-19 crisis. In order to fund this endeavor, The Arc brought on the support of multiple corporate community partners, such as Rice Fergus Miller and Kitsap County Government to name just two, and created a GoFundMe page to allow pass-through donations by individuals in our communities. And to date, Full Circle Meals has raised over $270,000!

Before this program, some area restaurants were providing meals to first-responders. Steve Sego and his wife, Coreen Haydock, owners of The Dock Bar & Eatery in Port Orchard, had an idea that was the genesis of the Full Circle concept. They had a sense there were tons of people out there who were in need of meals, so they made contacts and received referrals. They did a beta test on their business to see how much in donations they could raise, and how feasible it would be for an eatery to respond to such a donor base in preparing meals for those in need during this crisis. This beta test brought in nearly $30,000 in committed funds and pledges, and provided a cost effective model. At that point, Steve brought this idea to The Arc to expand on the concept. From there, Steve became the Volunteer Project Manager for this program.

Since April, Full Circle Meals has delivered nearly 16,000 meals! So far, the recipients of meals include developmentally disabled, adult clients of The Arc of the Peninsulas; the Kitsap Rescue Mission in downtown Bremerton (7 days a week); the medical and administrative staff at the Washington Veterans Home in Port Orchard (a.k.a. Retsil); the Homeless Veterans’ Project; a number of assisted living and memory care facilities across the region; low-income senior housing; and a LifePoint Church project that helps at-risk teens and low income and homeless families. Although the staff at Retsil is paid, the meals are a morale booster to the front-liners taking care of one of Kitsap's high-risk groups - approximately 240 Veterans - which carries its share of anxiety and intensity.

On the other side of the coin, per Steve, is that catering companies are the most at-risk, economically, since summers are usually their "Christmas Retail" period and they may not be geared to provide take-out. A collaborative spirit brought onboard Kitsap Credit Union, that contributed $10,000. They also printed design stickers for packaged meals, and donation signs. These signs were posted at Orchard Foods franchises, such as KFC and Taco Bell, raising nearly $15,000 toward Full Circle Meals.

As a result of the enormous outpouring of generosity, more than 200 meals go out daily that are prepared for and packaged by food establishments and caterers from South Kitsap through North Kitsap. Below are the restaurants and catering businesses that have been part of this woven social fabric:

As this current situation unfolds, we encourage you to consider donating to The Arc at 3242 North Perry Avenue, Bremerton, WA 98310 indicating your donation is for Full Circle Meals or to go directly to the Full Circle Meals GoFundMe page! To learn and see more about this multi-community collaboration visit their Facebook page!