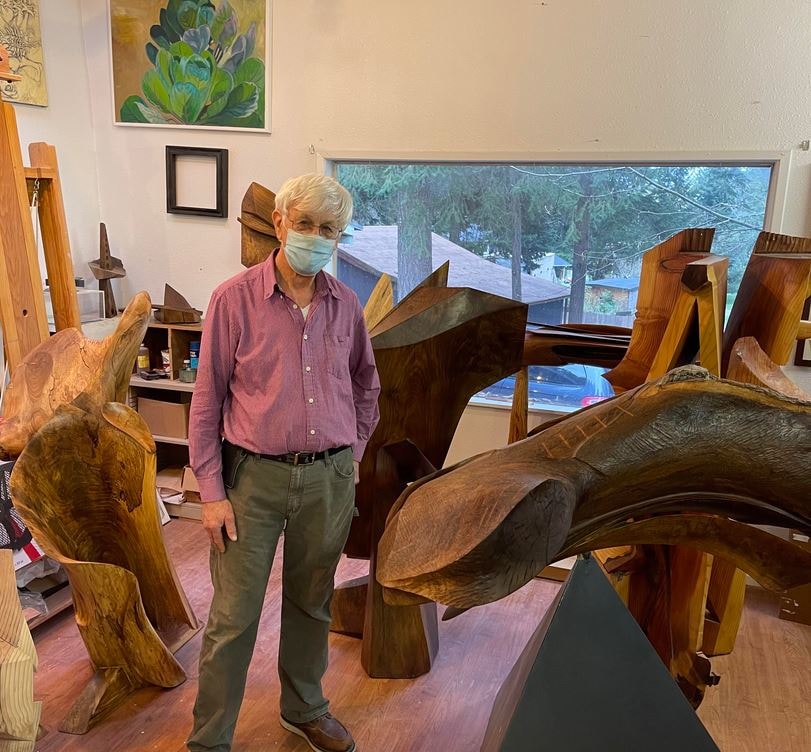 Alan Newberg is a local, award-winning artist with work exhibited widely and included in numerous museums and corporate and private collections. Because Alan Newberg has many artistic accomplishments over a span of decades, he has been the subject of countless interviews in connection with whatever artistic situation was occurring for him at the time! Artists and their art are not separate from, but in fact reflect their evolution as human beings.

Experience Kitsap’s aim is to peek in behind the art, in a sense to follow Mr. Newberg’s human journey, and how his art has evolved in reflecting that journey. In April 2021, he had an exhibition, Image and Abstraction, which was a two person feature show of sculpture by Alan Newberg and paintings by Jane Friedman at the Northwind Arts Center. We interviewed both, and you can read the interview with Jane Friedman here.

When did you discover that you wanted to make art?
I cannot remember when I didn’t draw. My mother always encouraged us kids to draw, and we were allowed to do so on the walls in our bedrooms without being chastised. Art books were around the home, accessible for the family. My mother attended a year of art school in Omaha, Nebraska, so she had some training. I only learned about her art school training at the end of her life.

And how did your connection with wood come about?
My father operated a small sawmill 5 miles south of Custer, South Dakota that my grandfather bought in 1923. Having been born in and growing up in a sawmill environment, I had access to wood, nails and tools to work it with from an early age. While still in grade school I built toy bulldozers, trucks and tractors from the lumber scraps we used as firewood. Working with wood and drawing were both part of my life from very early on. We had an unfinished basement, and a gravity heat circulation furnace with a layer of plaster of Paris to insulate it. We broke pieces of the plaster off and used it as chalk to draw or write on the concrete walls. Being left-handed and perhaps a  bit dyslexic, I wrote from right to left, resulting in my name written across the basement walls as 'NALA NALA NALA.'

When Experience Kitsap first discovered your work at Collective Visions Gallery, around 1995, when the gallery was at 2nd & Washington in Bremerton, we saw you as a painter. When did that change?
Most of my professional career has been primarily as a painter, but one who also did some sculpture. Now I describe myself as a sculptor who occasionally does some painting.

Over ensuing years, we were particularly intrigued by paintings inspired by travels to such places as Africa, El Salvador and Bangladesh. Quoting from your newly published catalogue for the Port Townsend show – “We were advised to not take photographs, but the experience of seeing people living in the dump was seared into memory.” What can you tell us about your travels, and what inspired the scenes you depicted in those particular paintings?
In the mid-1980s I pledged $10 a month for life to the Hunger Project. When I started doing that, I got other 'opportunities' on contributing. One was with an organization called RESULTS. Their goal is to create the political will to end hunger and abject poverty. I decided I could have greater impact by becoming a volunteer with RESULTS and advocating for microcredit as a part of US foreign aid. The poorest people of the world are children and women. Women provided with micro loans direct their money into their small businesses, towards education of their children, toward the health of their children. We’ve learned that husbands living in poverty often spend their money to something that raises their status - like a moped. So women’s priorities really help improve their children's situations. They're just more responsible with spending money.

In his introduction for your catalogue produced for the April show, Joseph Bednarik says, “You learn to see deeply into the world by looking deeply into the world, over and over again.” What feelings evoked your energy toward painting those pictures? Did that kind of ‘looking’ result in any ah-ha moments that identified something specific?
I ended up supporting RESULTS and became a monthly sponsor. I started the first Kitsap chapter in 1993; RESULTS sponsored tours to the countries where the projects we were advocating were located. People returning from these trips became better citizen lobbyists. I went to El Salvador on such a tour. He points to a painting in his studio titled Defiance: Behind the Mask: That's a painting of a community that lives on the edge of a dump. They build their houses out of corrugated cardboard and sticks, and then bind them with blue tarps. That trip ‘tugged my heart’. When I got back I did a  series of 18 paintings of El Salvador. Later, I went on another 'microcredit' trip to Bangladesh. I also volunteered in Guatemala and China with Habitat for Humanity to build a few houses.

You say that other inspiration includes science (physics, astronomy & biology) as well as contemporary literature and social issues. Moving to your work as a wood sculptor, there are pieces in the upcoming show that were created from a black walnut tree felled in Manette. Tell us something about that.
I acquired a 22 foot long black walnut log that grew in Manette, but had to let it lie around for 5 years just for it to start to dry out. I stored it out of the weather, up off of the ground. Letting it dry slowly allowed for less cracking or 'checking.' The slower it dried the better. Once I got started carving on that log, I discovered I really liked the way walnut carved and the way it looked. I found myself getting more deeply involved in my artwork. When you wake up in the middle of the night thinking of it, when it gets a hold of you like that, and it seems like it talks back and you have a running, almost a running argument with your artwork on how it's going to be, that’s the best. As an artist you have to be a good listener. The fact that I was carving black walnut affected the content of the artwork for both the Nina Simone sculpture, and the piece titled Spine of Black Resistance.

What can you tell us about Homage to Quanah Parker – another sculpture that will be in the show?
I read a book about the history of Quanah Parker and learned that he was the son of a native Comanche Chief and a white woman who had been taken captive and became fully integrated in the tribe; I was very taken by the story. I happened upon a log that was a redwood sequoia and so I started carving on that. The heartwood was red and the sapwood was white. I usually start out with a chainsaw and rough it out. So, as I became aware of there being a lot of red and white, the wood determined a part of the central content of that piece – Homage to Quanah Parker.

Now, regarding your sculpture of Nina Simone: What It is to Be Free - what inspired you?
As already stated, I am very affected by the materials I work in, but I am also equally affected by events in our world, by my reading, and by my own past work. I suddenly found myself wanting to express my admiration for this prominent jazz singer and civil rights activist. I've always been fond of jazz, and Nina Simone has been my favorite jazz singer for the 30 years since I learned about her. When I started doing carvings, especially with the big walnut log, I was moving towards abstraction. In fact, I would say Spine of Black Resistance: Strike For Your Lives is very abstract and very symbolic. I didn't know what I wanted to do next, but I wanted to continue with the success of the idea of the Spine of Black Resistance.

You say a priority when starting an artwork is to "make it interesting." The emotion in your work comes from your feelings about strong ideas. You get ideas in various ways, sometimes guided by an ideal. In the catalogue you say you were very inspired by the story of, and the speech made by a free black minister in the North, Henry Highland Garnet, twenty years before the American Civil War.
It's just simple things like that, and once you get an idea you just follow it and notice things about it. I never decided I needed to do a Black resistance sculpture, but there had been a killing in the street, and the idea of racial problems being in the air that needed to be dealt with, and that Black people's resistance was admirable. I never thought that I needed to do a Black resistance sculpture; I don't see myself as one who does art to be 'protest art', but I mostly just look around and read and that's how the work happens.

On the subject of COVID, you spoke of sculptures you have done, inspired by the pandemic situation. What can you tell us about those?
I have done a couple of pieces, one called Survivor: Not Just a Bad Hair Day. Another is Angel for Modern Time.  I was thinking that, after the fact, seem to spring from the pandemic. I was thinking that everyone feels that the epidemic has to be survived. I used off cuts from previous works, and the nature of the shape of those pieces influences what they will become. It just begins to unfold. So, we all feel like we're going through a bigger ordeal than just getting our hair right is the idea contained in the title.