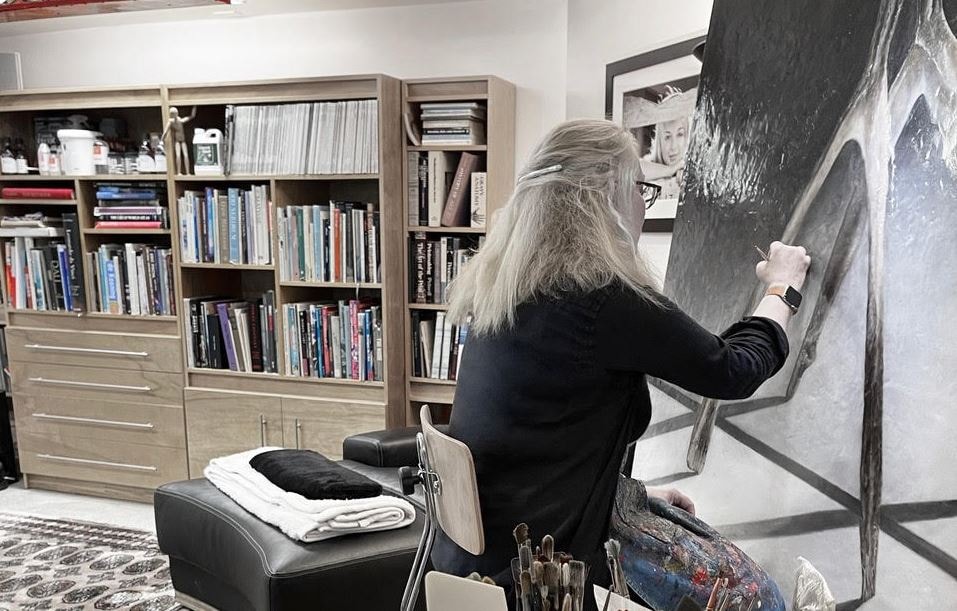 Jane Friedman recently exhibited her artwork at the Northwind Arts Center at 701 Water Street in Port Townsend with co-exhibitor Alan Newberg. Her pieces in that April 2021 show included a number of her encaustics that provided a depth of personal journey and self-reflection.

When we first saw Jane Friedman's work in 2018, at her now-closed Friedman Oens Gallery on Bainbridge Island, her pieces included steel-framed, encaustic artwork with maps and found metal. In fact, one such piece titled Work in Progress, included part of an old band-saw she discovered on her property in Illahee.

Was the Friedman Oens Gallery your first gallery and what did you learn from this experience?
Although I’ve never owned a gallery before, I have always had an appreciation for them. Whenever we go to a new city, I invariably map out galleries in order to explore as many as possible. As a co-owner of the Friedman Oens Gallery, I learned to appreciate the business side of the operation as well. Our gallery carried a lot of sculptures, which widened my understanding of the medium. Since it was a “working gallery,” I had the chance to work around the art and be inspired by the creative talents of others. Art is often created in solitude, so it was nice to paint in a space frequented by customers and other artists.

What can you tell me about the community you experienced at your gallery in the complex of shops on Three Tree Lane, as well as the Island itself?  Also, did your gallery have any collaborations with your then neighbor - the Bainbridge Artisan Resource Network?
Yes, Bainbridge Island is a close community, especially in the art world.  The various business owners at Three Tree Lane are a fabulous bunch, and the interesting mix of businesses creates a friendly synergy. For example, people would stop by Eagle Harbor Winery and come over to look at our collection while enjoying a glass of wine. The gallery didn’t have any formal connection to the BARN (Bainbridge Artisan Resource Network), but they certainly added to the creative atmosphere and were great neighbors.

Prior to living in Kitsap, you were in Alaska for 15 years and involved in the art scene in Anchorage. During this time, your work used pure pigment and acrylic on paper. Have you moved away from using these elements in your work?
I moved from Alaska in 1996 and have lived in Kitsap County for the last 20 years. I still often use the pure pigments mixed into the encaustic. Encaustic was one of the oldest forms of painting, popular in ancient Greece and Rome, but it kind of died out. Jasper Johns was one of the modern painters who brought it back into popularity through his work. I was intrigued by the medium, even though I find it very challenging to use. I like that it’s a natural product made out of beeswax and damar resin, which yields a unique texture and translucence. I still use the pure pigments occasionally, but lately, I combine them with the encaustic and oil paint to accentuate color, texture, and depth.

You were involved in a number of exhibitions in Alaska. Since you've been here in Kitsap, you have been involved in some exhibitions involving Bremerton's Collective Visions Gallery. How far back is your involvement with Collective Visions Gallery and what other galleries have you exhibited in regionally?
Regionally being Kitsap or beyond? I was very fortunate to launch my career in Anchorage. We had such a vibrant art scene, and the community was very supportive. The opportunity to show my work in local galleries and solo shows at the State Museum in Juneau and the Anchorage Museum of History and Art was humbling and exciting. After moving down here from Anchorage, I had focused mainly on commissions and my own personal painting. Later, my husband and I ran into Alan Newberg by chance at a fundraiser in Bremerton. He talked about his involvement in the Collective Visions Gallery, and we started a conversation that has continued to this day. Alan suggested that I enter the CVG annual show, and I was thrilled to submit a piece for that exhibition. I wasn’t a member of the collective, but I was on the show committee for a while, and I also helped with the opening night. It was great to engage with other artists through that experience. I’m so grateful that Alan suggested we do this show together at the Northwind Arts Center. He’s a wonderful collaborator and friend, and I learn so much from him.

Had you ever exhibited at the Northwind Arts Center?
No, I have not. However, I lived in Port Hadlock for a couple of years and visited the gallery many times. I have always been impressed with the space and the artists that show their work there.

You describe your early influences to include philosophy, mythology, and literature. Now, in the upcoming exhibition at the Northwind Arts Center you are telling more of your own story and how you have found inspiration in a wide variety of places. Can you describe your own story? When you say "variety of places" do you mean Alaska or here in this part of the Northwest?
By “variety of places,” I was really trying to express that previously I was creating shows that had a unified theme focusing on a philosophical question or issue. Now, my work is more varied, finding inspiration in natural patterns, relationships, or objects found on the beach. Earlier in my career, my art was more of a scholarly pursuit. I had sort of an awakening at UAA (University of Alaska Anchorage), where I took so many interesting classes in literature, history, and religion. Looking at art through the lens of its historical period brought about a better understanding of both. My early shows were based on themes developed by T.S. Elliot, Joseph Campbell, and Shakespeare. When I read something like, “I have heard the mermaids singing, each to each; I do not think that they will sing to me,” I would walk through what it means by putting my thoughts on canvas. Sitting with an idea for the many hours it takes to design and create a painting, you get plenty of time to contemplate these concepts. My current work is perhaps a reflection of the happiness I’ve found in this time period, and the natural beauty of the Puget Sound region. There certainly remains a place to explore deep philosophical questions through art, but the pieces in this show are not the result of reading and thinking about great works, but flow from experiencing firsthand important people, places, and objects.

In your piece titled Wishbone, what were the elements that went into this piece? Are you willing to describe the story behind this piece?
I used encaustic, oil, and pan pastel on a wood panel to create this painting. I was born around Thanksgiving, and my grandfather saved the wishbone from the turkey that year, let it dry, and wrapped it in foil with a little note that said “Janey’s first Thanksgiving.” Over the years, he put it on the Christmas tree like an ornament, and he eventually gave it to me. Each year I put it on my tree. Then one year, the foil started to unravel. I just remember looking at it and thinking, “WOW! That looks like human legs dancing.” The image remained with me for years. And then I had the idea to put the legs in the reflection. So we’re left with this dead bone from a carcass, and yet it was dreaming of something grander.

What can you tell me about your piece titled John's Swing?
This piece was inspired by my grandson swinging at Seaside Beach, near Astoria, Oregon, with a storm brewing in the distance. The winds were kicking up, yet he was happily swinging along. So I was trying to capture that moment, where there is so much innocence, imagination, fearlessness, and joy, even as a storm is brewing in the distance. It is sort of a tempered hopefulness in life. The ability of children to find wonder, even on an empty beach on a cold winter day, is an inspiration. The landscape is stark, the colors cold, and he’s all bundled up against the wind. But you know, without seeing his face, he’s smiling and having the time of his life.

Your Pod series of paintings include the titles of Pod 1 - A Fish out of Water, Pod 2 - Parachutes and Jelly Fish, and Pod 3 - Seahorses. In what medium did you produce these works and could you provide any insight into the meaning behind the golden thread at the base of the dried lotus pod head?
That’s an interesting view of the jellyfish, with the parachutes going into the pod as part of their regeneration. The wonderful thing about art is that it resonates differently with every viewer. My thought was that the lotus pod was casting seeds, abandoning control, and allowing nature to take its course. The three pod paintings are created with encaustic, oil, and pan pastel. The series is meant to be seen as a journey, representing different stages of life and love. Sometimes chaotic, sometimes peaceful, with a quiet beauty and a simple optimism. There is a golden element in each painting, illustrating the larger theme. The gold thread represents commitment within relationships. Beneath the aged pods, the seahorses share a quiet moment at the base of the lotus stem.