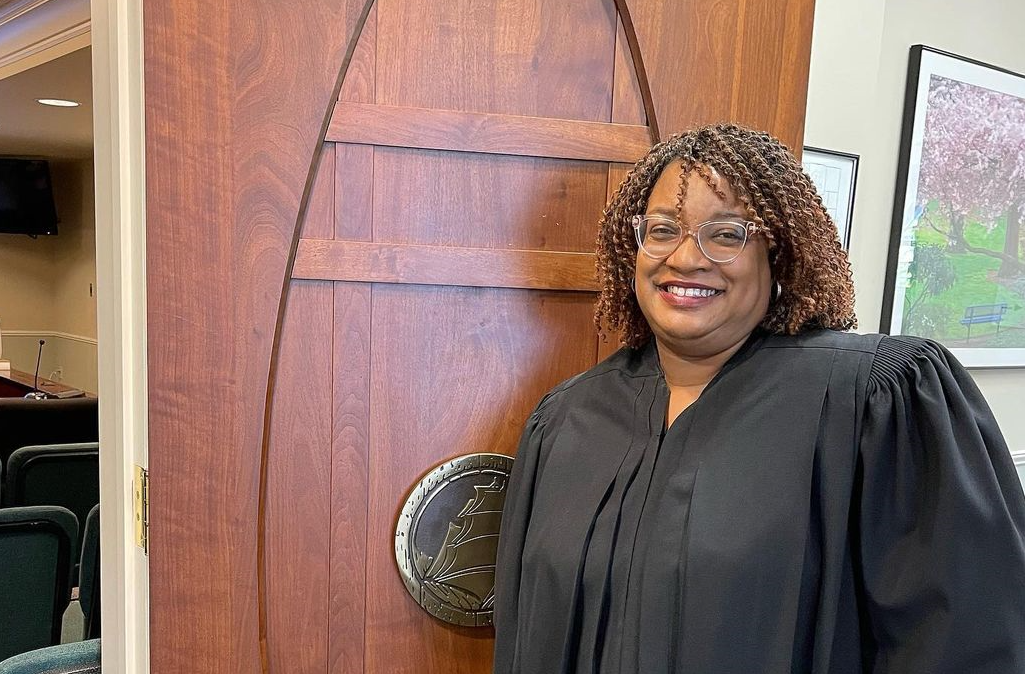 Experience Kitsap recently sat down with Judge Tracy Flood, the elected Judge at the Bremerton Municipal Court in Kitsap County. Judge Flood’s court, which sits at the Bremerton courthouse, 550 Park Avenue, is the only full-time municipal court in Kitsap County, while municipal courts in Port Orchard, Poulsbo, and Bainbridge Island are currently part time.

Municipal Courts are courts of limited jurisdiction which hear issues from contested traffic violations to any code infractions within City limits, including misdemeanor criminal matters. Maintaining a daily docket in a timely manner; however, can be challenging given the various defendants and their cases.

Interpreter Calendar
Judge Flood observed that specific cases slow down the roster. Chief among those requiring more time to assure accuracy, fairness and due process are those whose defendants’ first language is not English. To remedy this situation, she implemented an interpreter calendar twice a month on Tuesdays. Interpreters for defendants who speak Mam and Q’eqchi (languages of our Guatemalan communities), Spanish, and Russian are state certified for most languages. Others are qualified and take an oath before the proceedings. Also, through staff openings due to retirement and relocation, the Bremerton Municipal Court hired an administrative person bilingual in English and Spanish. Of note is that hiring challenges because of the pandemic are national issues for courts.

Therapeutic Court
Experience Kitsap wanted to know how Bremerton could be made safer, and heard Judge Flood’s ideas on achieving this. Her response: identify cases that may benefit from coordination and collaboration with various agencies for the long-term goal of building a constructive relationship with the community. With the assistance of a professional grant writer, Judge Flood has written four grant proposals, to date, that funded hiring a Therapeutic Court Coordinator the first week of October, 2022. The Therapeutic Court Coordinator will be responsible for assisting and engaging participants of Therapeutic Court through the entire process of their court case including assisting with intakes, needs assessment, service planning and linking community providers, and attending appointments and court appearances.

It is anticipated this process will launch in January, 2023. Judge Flood states that data show Therapeutic Courts have been successful in reducing recidivism for a population with dual diagnoses of substance abuse and mental health issues. She says, “When you have people in Therapeutic Courts, chances of them re-offending are lower as they're provided with support they are otherwise unable to get. Therapeutic Courts bring accountability and safety to the community, which may ease the burden on our jails as far as housing the un-housed.” The process – enabled by Therapeutic Courts - puts cases with dual diagnoses of substance abuse and mental health issues in touch with representatives of local, state, and federal services to assist with meeting defendants' basic needs, “because we know essential needs are clothing, food, and shelter. This benefits the individual and our entire Kitsap community.”

A plan is on track, through coordination with the local NAACP Bremerton Unit 1134 (National Association for the Advancement of Colored People) and the Catalyst Public School in Manette, to have high school students from the Kitsap Black Student Union visit in November, 2022. This session is projected to include high school students associated with the Kitsap Black Student Union under Director Jewel Shepherd-Sampson. It will include judicial role play, lunch, a tour of the courthouse with observation of actual proceedings, as well as a review of the three branches of government with a focus on the judicial branch.

Judge Flood maintains a busy schedule of community-building undertakings with the intent of achieving an improved and safer community experience for all Bremerton residents.

Published originally on October 22, 2022 based on an interview performed in person at the Bremerton Municipal Courthouse on September 7, 2022.