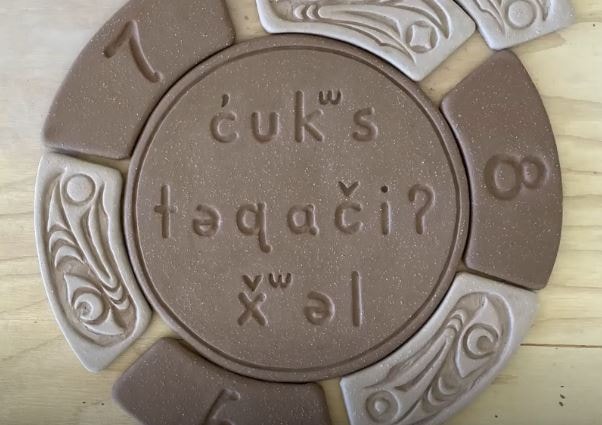 On May 12, 2022, Olympic College (OC) hosted a campus reception in the Arts and Theatre building, followed by an outdoors ceremony, ahead of the installation of eight plinths (stout pillars) to be placed in front of various buildings on campus by the end of spring. These plinths are topped by tiles in the Lushootseed language and English, their completion the result of a four-year-long (2018-2022) partnership and collaboration between Deanna Pindell, OC Professor in Art and Art History, and Valarie St. Pierre, an OC student and the project’s cultural leader.

Valarie, who hails from Montana, is a member of the Apsáalooke Nation with other tribal ties, as well. In addition to initiating the language markers project, she took the lead in assembling indigenous students from this region to work on the project. Guided by Yakima leaders, she was the primary writer of the land acknowledgement statement approved by the OC Board of Trustees, widely used on campus and published on the campus website. Land acknowledgement statements give respect to original inhabitants from those who presently occupy the land.

First nations have inhabited the Kitsap and Puget Sound regions for nearly 13,000 years, and Lushootseed is a distinct language under the Coast Salish language family. It was spoken southward to approximately where the city of Olympia is located, and northward into British Columbia, Canada. Lushootseed, dxʷsəqʷəb, translates as ‘place of clear salt water’, where the Suquamish tribe lives on the Port Madison Reservation.

Many efforts, by many participants on the project, went into creating the concrete plinths and tiles containing words in both Lushootseed and English:

During the outdoor ceremony, drumming, songs and dances were performed by the Suquamish Dance Team. Valarie created over a hundred gratitude bundles as gifts to each individual who helped along the way. Each came with a clay fired salmon made from a press on campus, representative of the Suquamish tribe’s gratitude, a bundle of sweet grass, sage from near the U.S. and Nova Scotia border, cedar from Olalla, and rosemary and lavender from friends in the Union Hill neighborhood of Bremerton.

Before digging into Mother Earth, indigenous people entreat permission to plant whatever will enter into the earth. They ask that the thing will bring good to those who experience its presence. They give gratitude for the place and the time.

tix̌ix̌dubut čəxʷ. huy'
Take care of yourself. Until we meet again.

To learn more about Lushootseed, visit the resources listed below:

For more information and to support the project, contact Deanna Pindell.