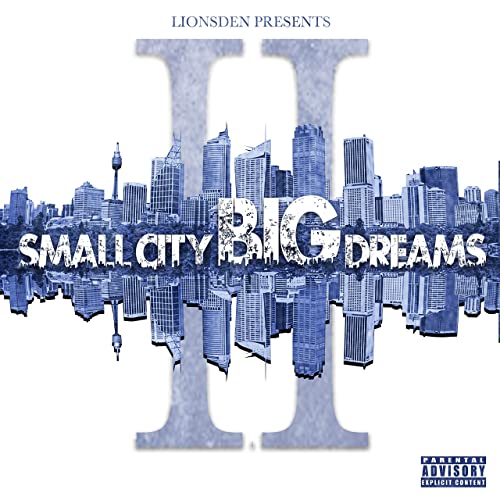 On April 17, 2020, Lions Den 360 released Small City Big Dreams, Vol. 2 on all major music streaming platforms. On it are 11 numbers treating us to sounds from street songs to R&B to a couple of acoustic numbers. There are performances from 18 artists with a dozen of them right out of Kitsap! Other featured music-makers hail from the West Coast, including Tacoma, Seattle and LA, and from as far away as Ohio and Virginia. Largely present on the album is Jordy Sam, who Kitsap Culture interviewed last year.

Volume I of Small City Big Dreams, which debuted in 2016, was performed by R&B and rap artists from Kitsap and nearby Tacoma and Seattle. Doc Blackwell, Lions Den 360, is excited about the release of the second volume, saying "it’s taken a while."

Doc uses BoomHouse Studios in Bremerton East that produces the sounds of local and regional artists in R&B, rap, soul, and related genres. The studios have been around since 2006, with recordings and mixing of numerous regional artists such as Smiley D, Jessica Domingo, Young Lew, and Destinee Triplet. Chris Dean, with over 15 years of mixing along with vocal tracking and instrument tracking, mixed each of the songs for Small City Big Dreams, Vol. 2.

Talking with Doc, Kitsap Culture learned something about what’s behind the beats on Small City Big Dreams, Vol. 2. First, Doc sent out invitations to a number of musicians to work with about 20 beats to produce the songs. By working with them, the artists developed the lyrics to match the beats and then recorded them at the studios. From the results of their work, BoomHouse Studios put together the album. Per Doc, "What they looked for was work that really pushed the music and would get into the heart and soul of fans."

Kitsap Culture: First, how did you come up with your moniker, Denzel 2AM?

Denzel 2AM: It's a funny story. Me and a couple of my friends were making music on a beat that we called 2AM, and I sang the chorus on it. We made that song and then after that I became known as Denzel 2AM.

Kitsap Culture: On this album, Small City, Big Dreams Vol 2, in your song, 'Paid For,'' you sing about taking care of your girlfriend. Talk, a little, about the overall process and the theme for the song.

Denzel 2AM: Basically, our whole process for approaching the song was to think outside the box. We heard the beat and thought, what are things people might not sing about with a beat like this? We just sort of were spit-balling ideas. Being able to spend money on others, and wanting to do so just because you care about them. Not because they need you to, but because you want to. My girlfriend, she doesn't need for me to pay for her to do her nails. But I'll do it for her because I love her.

Kitsap Culture: How long is the process for you and the others to hear the beat and to come up with the final product?

Denzel 2AM: Well, we all work and so once we were able to get together what probably took the longest was to find the time to spit-ball the ideas. But once we settled in on a concept, it took us all within a day to come up with the lyrics. Then, it took us about an hour and a half to two hours to produce the song.

Kitsap Culture: Do you have anything you would like to say about the protests, nation-wide, in response to the killing of George Perry Floyd, and what Black Lives Matter means to you?

Denzel 2AM:  I think the protests are awesome. I think it is super cool to see some communities are standing for what they believe in. I've always thought that police brutality was an issue, not just in the Black community, but also that's where I notice it most and what's most personal to me, but there is a lot to be done. Seeing it across America is cool, but seeing it in my home town, and hearing all these voices being heard I think the protests are awesome.

Kitsap Culture: Do you have anything you'd like to add?

Kitsap Culture: Jordy, in your song 'Stay Up,' you express a sincere appreciation to the people you know from your neighborhood and who are in prison, as well one person who has passed away. Later in the song, you shout out those who are gone but not forgotten. It was very moving, and I wanted to know what the theme of the song was and what inspired you.

Jordy Sam:  The theme is in the title - Stay up! Whatever situation you're going through, like your own hardships or your own neighborhood hardships or financial hardships or even people who are incarcerated who have been forgotten. As far as the person who died, it was my friend Luther Stoudemire in 2015. I felt like I had to take the beat into a deeper direction as far as content. He was the reason why I took up that song. It's also a shout out to all of those we've known who have passed away. Listening to the piano in the beat, it's just kind of got a "that's just the way it is" kind of vibe.

Kitsap Culture: Do you have any upcoming work or anything else about your music you want to share?

Jordy Sam: Right now I'm just building up my catalog again because over the summer I dropped three EPs basically and a lot of singles. Also, I'm getting into producing for other people. It meshes well when they have the same work ethic.

Kitsap Culture: Do you have anything you would like to say about the protests, nation-wide, in response to the killing of George Perry Floyd, and what Black Lives Matter means to you?

Kitsap Culture: First, please tell me about your moniker, 'It's Franky'.

It's Franky: Originally, my name was Little Bounce. At a certain point, I began thinking about my performance name as well as my life, and how my Grandmother used to call me 'Franky' when I was a kid. For a while, I had a lot of my own personal problems, but eventually began to understand what's priority and what isn't, and began to realize reality instead of fantasizing about it and being lazy. Now, the name, 'It's Franky', resembles me as a person, and I feel the name keeps a part of my Grandmother with me all the time as she has since passed away. Also, fun fact, I've learned that there was already an artist over in Kentucky with the same name as Little Bounce.

Kitsap Culture: I’ve got to say that I have no musical training or background. Music makers need an audience, though, and as that, the song you produced with Jordy Sam, 'Reality,' attracted me by the fast-paced nature of the lyrics, and at the same time, the laid back beat. Describe the theme in this song, and the relationship between the lyrics and the beat.

It's Franky: Me and Jordy Sam came up with the song from scratch in the studio and just finished it in one sitting. Jordy Sam made the beat and I came up with the lyrics. I love doing lyrics! Once the beat was completed, it already had an intelligence to itself and it just grabbed me in and I was hypnotized.

Kitsap Culture: Do you have anything you would like to say about the protests, nation-wide, occurring in response to the killing of George Perry Floyd, and what Black Lives Matter means to you?

It's Franky: When the whole George Floyd thing happened, I didn't think it was going to be a big thing. But this man created one of the biggest things in history. I can't even find the right words to describe it. Just the whole world knowing his story and seeing how communities have come together, and feeling the pain of him and his family and community is amazing. I like seeing all of the protests, but I don't agree with the looting and vandalizing. But, although I don't agree, I can understand because I can see the hurt and pain and they believe that the only way they will be heard is through this type of action. However, when they hit up local businesses, owned by regular people, that's when I feel like it's going too far.

Kitsap Culture: What are your next projects?