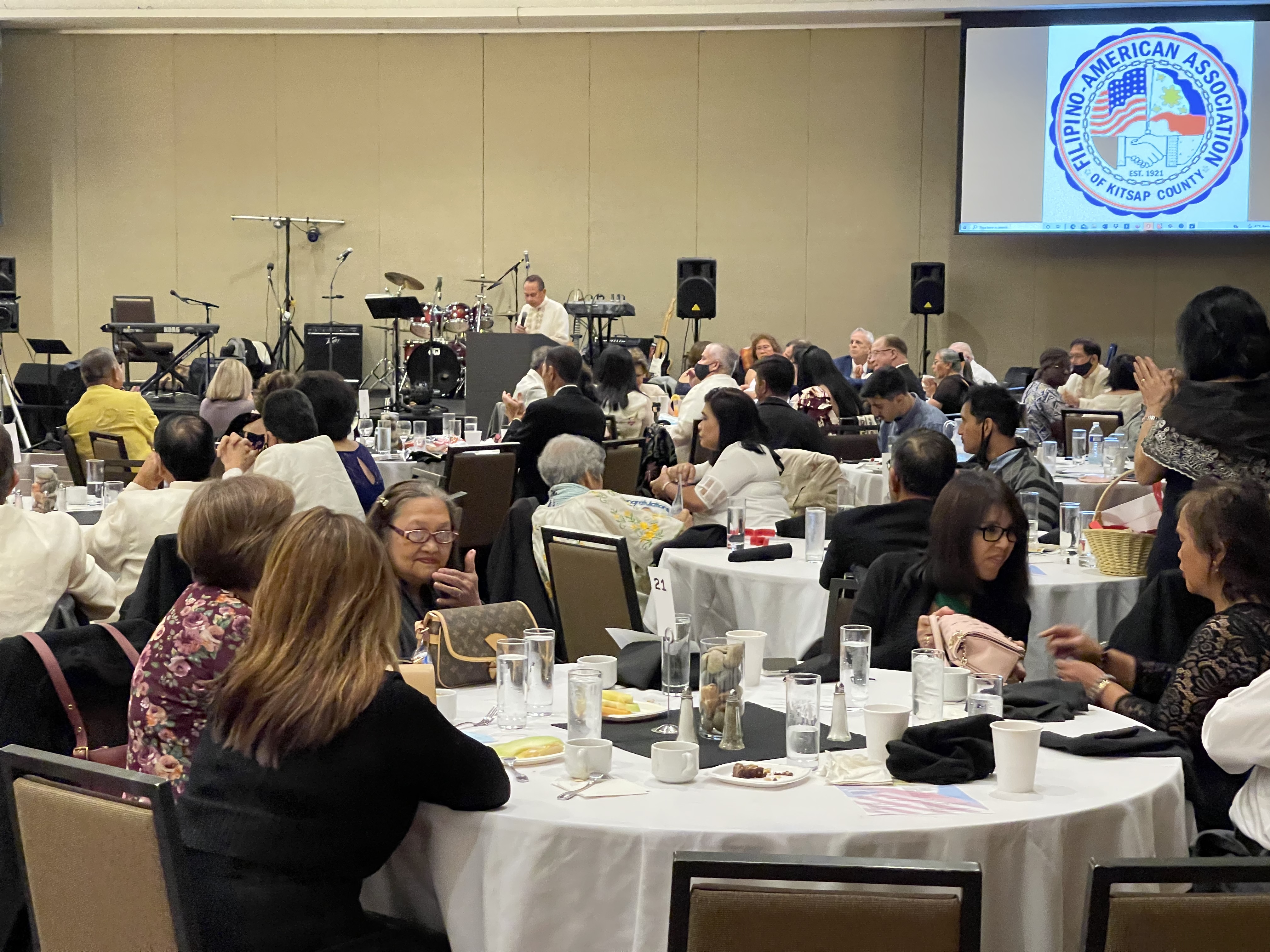 October of twenty-twenty one (2021) commemorated one hundred years since the Filipino-American Association of Kitsap County came into being. This momentous celebration occurred on November 6th, 2021, at the Clearwater Casino!

With a capacity of approximately 160 people for the event hall, the celebration sold out immediately! The program for the celebration included a singing of the national anthems for the Republic of the Philippines and the United States of America, eating dinner, and speeches by Fil-Am President Raul Bacas, Bremerton Mayor Greg Wheeler, and Brigadier General Oscar Bautista Hilman, the first Filipino-born person to achieve this rank in the U.S. military. Entertainment featured a solo vocal performance by Khaye Fernandez, music by The Chapinos USA Band of Kitsap, and folk dancing including the Banga, the Sakuting, and the Alitaptap dances!

The Filipino-American Association of Kitsap County, originally established as The Filipino Club in 1921, began with forty members. It has remained committed to supporting the Filipino community which began settling here as early as 1910. For the first two decades, the organization focused on celebrating familiar cultural holidays with local community functions.

Following World War II, the organization took on a more integrated relationship with the greater Bremerton community sponsoring events such as the Philippine Independence Day celebration on July 4, 1946; spearheading the Bremerton-Olongapo Sister City Program; and undertaking community projects including the Bremerton Beautification program by planting Globe Locust trees along 11th street between Warren Avenue and Pacific Avenue in Bremerton. As historically documented by Bremerton poetess Beatrice Sanchez, the Bremerton City Parks & Recreation Committee provided an empty corner lot (Sylvan Way & Olympus Drive NE) in the late 1960s, which the then president of the Fil-Am organization, Vincent Barrios, and the organization worked to clear for the eventual creation of the Bataan Park. The goal was to build a park to honor the sacrifices of Filipino and American soldiers who fought together at the Battle of Bataan in the Philippines during World War II and who experienced the Bataan Death March in which 60,000 to 80,000 Filipino and American prisoners of war were forced to march nearly 70 miles. Eventually, Bataan Park was dedicated on Saturday, April 10, 1976, and the remembrance day has been held annually there on the Saturday closest to April 9th, the day following the Battle of Bataan on which the march began.

Over the years, the club has held its meetings in various locations and in 2015 purchased the site at 2809 Spruce Avenue (former American Legion Post between Sheridan Road and Saar's Super Savers Foods). In addition to the club’s own fundraisers to help with renovations, cash and equipment donations were received from the Port Madison Enterprises, Philippine Nurses Association of America, Senior Citizens Club, and individual club members. Using a generous grant from the Clearwater Casino Resort (Port Madison Enterprises), the club renovated their kitchen turning it into a commercial kitchen that is licensed to be rented out to other entities and individuals. In addition to the kitchen, the entire club is available to be rented out for various events and parties.

The Filipino-American Association of Kitsap County gives to the community in the form of individual youth education scholarships, meals and other services that maintain the quality of life for seniors, donations to various charities for people of all cultures, and volunteerism. Its benevolence extends to the Philippines with cash and much needed supplies in support of orphans as well as those affected by natural disasters.

Special thanks given to Fil-Am Kitsap’s Chuchi, Estella, Virgil, and Elmer for the information they shared, as well as Cynthia of the Bremerton Parks & Recreation Department, Jeanine of the Kitsap County Historical Society Museum, and Andrew of the Kitsap County Government Administrative Services for their generous assistance with researching their historical records.